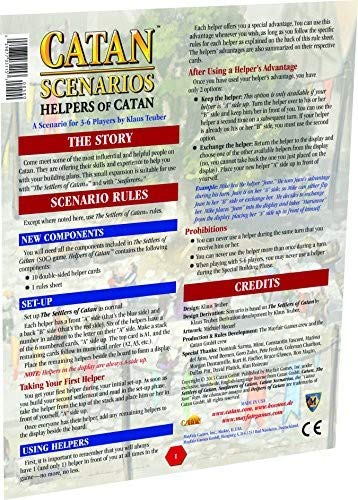 Catan Scenarios: Helpers of Catan – a mini-expansion for The Settlers of Catan that’s compatible with Catan: Seafarers and both The Settlers of Catan: 5-6 Player Extension and Catan: Seafarers – 5-6 Player Extension – consists of ten character cards, each of which has a different special ability that the player can use once or twice before trading for another. For example, Marianne lets you take any one resource card if you rolled something other than a 7, but didn’t get resources from that roll. As each player builds her second settlement, she takes a specific card based on player order, with approximate utility increasing to help combat earlier player advantage. A player must use her card’s ability before she may turn it in, but she may choose which card to take, adding a level of strategy.