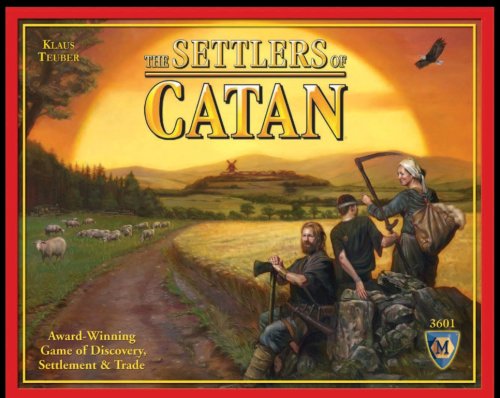 One of the most successful games of all time, Settlers of Catan is a trading and building game set in the mythical world of Catan. Players roll dice to determine which resources are generated each round and then must strategically trade those resources with other players to get what they need to build their settlements, cities and roads. With multiple ways to gain victory points and a board that changes in every play, Settlers of Catan is a game that can be played hundreds of different ways. The base of a hugely successful franchise, with multiple engaging expansions, Settlers is the core game of many collections, and is a wonderful way to spend time with family and friends.

The Settlers of Catan from Mayfair Games is an award-winning strategy game where players collect resources and use them to build roads, settlements and cities on their way to victory. The board itself is variable, making each game a little different from the next. Each round of The Settlers of Catan is intended to keep three or four players ages 10 and above engaged for up to 90 minutes.

The game rules and almanac booklet sets out four pages of guidelines for getting started. Don’t worry, the rules are straightforward and the four pages include plenty of illustrations. There’s a starting map that shows a well-balanced set-up for beginners to follow and directions that allow more advanced players to lay out the map of the island at random. You’ll have to pop the die-cut components of the game out of their cardboard holders before you play your first game.

The almanac portion of the booklet is laid out alphabetically, so while playing you can find answers to specific questions quickly. Useful entries remind you exactly what role pieces like the robber play, how actions like maritime trade work, and