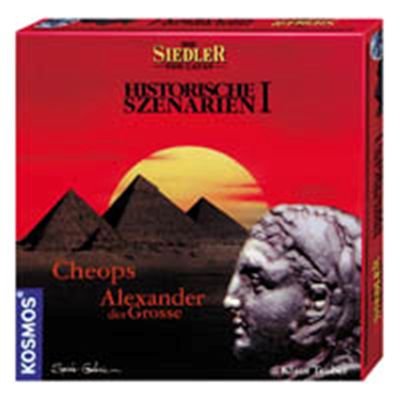 Follow in the Wake of Alexander the Great, buy settlements from him and vie for his favor. The map for „Cheops“ corresponds to the historical and geographical conditions of the time. Each player represents an Egyptian family. First, the players build roads, ships and settlements. The Pharaoh soon expresses the desire to build a large pyramid. But that is not simple. Egypt is richly blessed with wool and grain from the Nile deltas and quarries in the south, but wood and ore must be imported. These will come from the productive ore regions beyond the Red Sea and the forest-rich areas of Palestine. With sufficient gold, however, a player can buy what they cannot produce. The player who contributes the most stones to the building of the pyramid is richly rewarded by the Pharaoh. Quite the opposite befalls the players who contributed fewer stones.This edition contains the same components as Die Siedler von Catan: Historische Szenarien I: Cheops and Alexander der Groe. Only the cover art has changed.